Horrendously infrequent!
Be patient.  The comic may take awhile to load.


Uber-short summary: Glick, Harrison, the future Glick, and the Guardian of Time were captured by Enlil and brought to the Anu Array, a device he constructed to take control of the time stream.  Sara-29 broke out of prison and fired at Enlil from a hovercraft, apparently killing him.  Then the surrounding water levels rose and they were all flooded in.  Life's like that sometimes.

11/25/03
Crazy crazy world, eh?
I began this strip (hardly an accurate term for something 40 panels long...) last April.  I don't really have an excuse for it taking that long, except that I've worked on a lot of other things and done a lot in the meantime.  Halfway through I took a school trip to Britain.  Have you ever seen Highlander?  The whole movie takes place in New York, but they shot half of it in London for some reason, and if you listen to the commentary track, they'll point out which shots were shot in England and which were shot in real New York.
This comic is kind of like that.
For the first half, the water is from pictures I took at Montana de Oro in Morro Bay, which is about a 15 minute drive from my house.  In the second half, it's mostly a shot of the Thames river in London, tinted blue in Photoshop.  We were walking across a bridge (it may have been that crazy-ass Millennium Bridge, though I don't really remember), and I just stuck my camera over the edge and took a picture because I knew it would come in handy for Glick.
See?  I may be slow but I plan ahead (kinda).
I should also thank Shelley Carr for playing Sara's hand in a couple rotoscoped panels.  Top quality work.
Anyway, "Trial By Liar", the story I began in December 2001, is now complete.  So much has happened since then...
I hope to have the new Glick storyline going within the next month or two, after we finish  Random Rumble 2, another project which has taken a lot longer than expected.  If all goes as planned, the next (and final) storyline is going to be a lot of fun.  It's very different from anything I've done in the comic before, but it should also be effective in a way Glick Glidewell has never been in the past.  It will be a good conclusion to this four-year long story, and will also stand well on its own.
If you come here for the humor more than the angsty scifi drama, you'll be glade to know Angelo and I are planning a new wacky comic strip, tentatively titled We Never Learn.
In the meantime, you can always check out more of my work at my deviantart site and my auxilary extra-goofy deviantart site.

2) RR2, ideally finished by the end of the month.

4) The conclusion to Trial by Liar, immediately followed by the new (and almost certainly final) storyline, tentatively titled The Beginning, confusedly enough.

5) School paper strips, as before.

6) I may be doing a comic for glychs new site, as well as beta-testing Webcomicsworld on Modern Tales, but these are not yet concrete.

I thank you immensely for reading this.I hope you stick around for more, cause its going to be awesome.

(I did a comic roughly saying this, albeit in a much wackier fashion, which you can read here)

Some places my work has appeared in the past:

All comics are © 2001 Kane Lynch, unless otherwise noted.  All rights reserved.
This is a work of fiction, any similarity to real people or places or other nouns,  is purely coincidental.
Oh hell, that's not true.  I feature characters based on real people fairly often.  But not you.  You're different.
Glick Glidewell is hosted on Keenspace, a free webhosting and site automation service for webcomics. 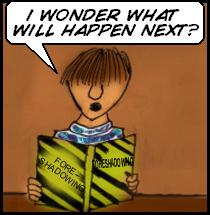